COVID-19 UPDATE: At Alert Level 1 the trail is fully open; trail services such as shuttles, bike hire and cafes are able to operate.

Please keep track of where you’ve been and who you’ve seen to help contact tracing if needed, and keep following the government's hygiene guidelines. You can read the official Golden Rules for Alert Level 1 here.

It’s a flat, easy ride offering contrasting scenes – from the salt-licked Firth of Thames with its notable birdlife, to the verdant Hauraki Plains and a flinty gorge strewn with intriguing gold mining relics.

Located south of Auckland and north of Tauranga, the Rail Trail is split into five sections, with an exciting new section to Matamata – the home of Hobbiton – recently opened. The whole trail can be completed over 3–5 days, overnighting in atmospheric accommodation along the way. Day rides are also popular, with convenient bike hire and shuttles making the logistics a breeze.

The Hauraki Rail Trail is currently around 173km long, split into five sections. They are described below in an approximately north to south direction, although note that one section (Paeroa to Waihi) heads off on a tangent as illustrated in the map. The whole trail can be completed in three to five days, but all sections make excellent day rides.

Named ‘The Journey of Te Aho’, this section of trail follows in the footsteps of an early Māori settler, Te Aho. Starting from Kaiaua, its winds around the edge of the shallow Firth of Thames, over chenier shell banks and through wetlands of international significance.

The trail will officially start at Kaiaua when an extension is completed around December 2020. For now, a good place to start is the Pūkorokoro–Miranda Shorebird Centre where you can learn about the area’s precious birdlife before heading out to the hides to see them for yourself. Fanatical twitchers may wish to check ahead the arrival and departure schedules of various migratory species.

From Miranda Holiday Park and Hot Pools, the trail skirts around the Firth, following stop banks for much of the way. There are expansive views of coastal wetlands and verdant farmland, with the volcanic Coromandel Ranges a dramatic backdrop. Refreshments are available in the villages of Waitakaruru, Pipiroa and Kopu.

After the Kopu Bridge, the trail turns northwards for a few kilometres to reach Thames, an atmospheric town with plenty of dining and accommodation options. As you approach the town centre, look out for various sculptures along the community’s arts trail.

This richly historic area was once only accessible via the two rivers, Waihou and Hikutaia. The Māori people believed that the deep valleys cutting through the Coromandel Ranges were carved by the thrashing tail of a taniwha.

This is also the place where bushmen, gum-diggers and gold miners sought their fortunes, routinely crossing over to the eastern side of the ranges on rugged bush tracks through forests of mighty Kauri.

It is amidst this history that this section of trail begins, at first following the old railway line out of Thames town and onward through lush farmland with the impressive ranges a constant companion to the east.

Matatoki’s Cheese Barn, The Coach House at Puriri and the Convenient Cow Cafe at Hikutaia are nicely spaced pit-stops. Near Paeroa, it’s also just a short detour to the Historical Maritime Park, once New Zealand’s most inland port.

Paeroa, at the southern end of this section is ‘world famous in New Zealand’ for its giant L&P bottle – a homage to home-grown soda-pop. Its antique shops are also notable. There’s also accommodation and places to eat for riders wanting to overnight here.

TRAIL CLOSURE: The section of Trail between Waikino and Waihi is CLOSED. There is a slip in the cutting which has the potential to result in serious injury or death. Riders can opt to take the train from Waihi to Waikino, or start their ride from Waikino.

The most popular section of the Hauraki Rail Trail follows the Ohinemuri River through the dramatic Karangahake Gorge, a deep canyon cut through the Kaimai Ranges.

Highlights of the gorge include a cascading waterfall, photogenic gold mining sites and the charmingly old-fashioned Victoria Battery museum, plus the freaky Windows Walkway that burrows through a shadowy side-gorge. The pièce de résistance is an amazing 1100-metre long railway tunnel, wobbled through with the aid of a torch.

Near the halfway point is cute Waikino Station where there’s a cafe and bike hire. This is the terminus of the vintage train that runs between Waikino and Waihi; it’s well worth timing your riding to coincide with its running times as it’s a pretty special experience. Otherwise, it’s another 8km of riding to Waihi.

With plenty of accommodation and places to eat – as well as proximity to glorious beaches – Waihi is a great base for your Hauraki adventures. This ‘Heart of Gold’ town still has an operational mine that can be visited on tours, plus the wonderfully interactive museum known as the Gold Discovery Centre.

Heading south, this leisurely section passes through pretty Waikato farmland dotted with dairy cows and other farm animals. Front and centre are the bushy Kaimai–Mamaku Ranges and their 952m-highpoint Mt Te Aroha (952m; ‘the mountain of love’), plus wide-ranging views over the Hauraki Plains.

Currently, the southern terminus of the Rail Trail is Te Aroha, a small rural town with historic mineral hot pools – a great way to soothe pedal-weary muscles. Te Aroha also has a lovely town domain, and is home to some great cafes.

It stretches all the way to Matamata, the home of Hobbiton, where visitors can get their Lord Of The Rings and Hobbit fix. (It’s well worth going for the gardens alone, never mind a refreshing pint at the Green Dragon Inn!) Along the way it passes various landmarks including the scenic Wairere Falls, Stanley Landing and the Firth Tower.

The beauty of the Hauraki Rail Trail is the ability to tailor a ride of almost any length, with plenty of options for return rides, or one-way trips for riders with a pick-up. The following are popular day rides.

This popular option starts in the historic town of Waihi, from where it’s a gentle downhill into Karangakahe Gorge, crossing bridges and sticking close to the pretty river. Check out the Victoria Battery and Museum and enjoy the attractions within the gorge including the 1100m-long tunnel, cascading waterfall, and the wonderful Windows Walkway.

Waikino Station’s cafe and bike hire make it a good place to launch a lovely ride into the narrows of the Karangahake Gorge. Check out the peculiar remains of the Victoria Battery, and be sure to bring a torch to guide you through the spooky tunnel. Plunge into the river for a swim and explore the walkways branching off from the reserve.

This delightful ride heads along the Thames waterfront and town outskirts before following the rail trail through lush countryside to Matatoki Cheese Factory – the kids will love the fun farm park here. A bit further on is the Puriri pub.

This pleasant outing takes in the Thames waterfront, with its arts trail sculptures and other interesting sights. Having crossed the river, the trail follows the stopbanks to Bugger Cafe – a notable local cafe with a great sense of humour and heavenly ice cream sundaes.

A long but enjoyable day trip for fit riders, this ride passes through farmland and the picturesque Karangahake Gorge with all its attractions including tunnels, waterfall and the wonderful Windows Walkway. Local shuttles can transport you back to your starting point.

An easy day trip on mainly cruisy flat track, with hot pools at one end (Te Aroha) and Hobbits galore at the other (Matamata). Whichever direction you're headed it'll be a memorable day out. En route you'll travel through fertile farmland and impressive horse studs, and pass a ravine and pretty Wairere Falls.

The Hauraki Rail Trail is suitable for riders of all ages and abilities, being wide, flat and smooth for most of the way. Riders should take extra care on short road sections and crossings, and at cattle grids where wheels can get wedged.

Friendly rail trail terrain makes this suitable for everything from children’s bikes and uprights, to touring bikes, mountain bikes and e-bikes.

Although the trail is well signposted and easily accessible from the highway, carrying the official map will enhance the experience by pinpointing landmarks and assisting with ride timings. The map can be downloaded from the trail website. A free brochure with maps and listings for local attractions is also available from visitor centres and many shops/accommodation providers along the way.

The Hauraki region is blessed with a temperate climate, making for great riding at any time of year. Riders should, however, always check the forecast, pack appropriate clothing, and note that the wind direction can greatly affect the enjoyment of the ride. A hat, sunscreen and plenty of water are essential in the summer months as there are long stretches with minimal shade.

Dotted along the trail and in its small rural towns are numerous cafes, restaurants, ice cream shops and even a winery. Calling in for refreshments is a highlight of the trail, so plan ahead to hit the rights spots at the right time of day.

We recommend, however, carrying plenty of snacks and drinks to keep you fueled up; this is especially important out of peak season when some cafes and shops run on limited hours. Water bottles can be filled at settlements along the way; be sure to carry plenty on hot days.

Cellphone coverage is generally good; it can get patchy within the narrows of Karangahake Gorge.

Toilets are located at convenient points along the trail.

Close to Auckland, the Coromandel and Bay of Plenty, the Hauraki area is well set up for visitors. During the busy summer season, December–March, it will pay to book accommodation and transport in advance.

The historic gold towns of Thames and Paeroa make a great base for Hauraki Rail Trail adventures, with plenty of accommodation and eateries, but the trail’s other towns and smaller settlements also have much to offer.

Auckland airport is around 90 minutes’ drive away. Various scenic North Island highways connect Hauraki to other popular destinations such as Tauranga, Rotorua, Taupō and the Hawke’s Bay.

Nationwide Intercity buses service all the towns along the trail, while smaller shuttle operators provide transport around the local area.

Bike hire, shuttles and luggage transfers are available from operators based on and around in the trail, with Thames, Waihi and Paeroa the major hubs.

While casual bike hire is usually easy to arrange on the spot, it will pay to book in advance during peak season (December to March). It is essential to book any shuttles in advance, too.

There’s plenty of accommodation in visitor-friendly towns and rural settlements along the Rail Trail, and in popular destinations nearby such as Waihi Beach, Coromandel town and Whangamata.

Be sure to book well in advance during peak season (December–March). 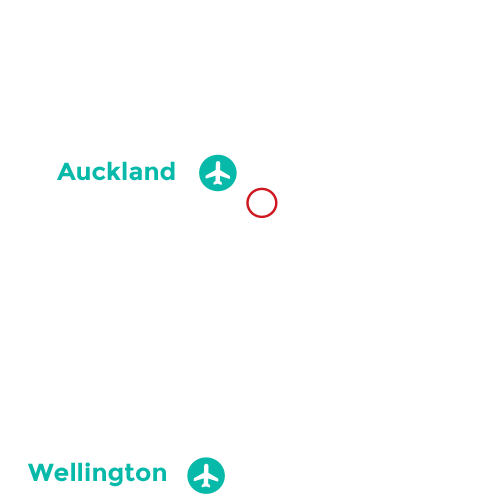