The Old Ghost Road was the stuff of legend even before it opened in 2015. But it turns out that the trail’s incredible backstory was just the beginning of an epic set to span the generations.

The first time I heard of the Old Ghost Road was in 2013. My husband Lee and I were visiting the Buller District when our friend Penny told us about ambitious plans to build New Zealand’s longest continuous single-track. It had the potential, she said, to transform Westport and well beyond.

Penny arranged for us to meet Phil Rossiter, who promptly arranged for pilot Wayne Pratt to chopper us to the tops for a look-see, bikes in tow. We were wowed.

We returned twice to ride freshly cut sections before the full trail finally launched in Westport in late 2015. The opening celebration was unforgettable, complete with powerful speeches and a gripping doco about the trail build. By the time Marion ‘Weasel’ Boatwright had sung his tribute song there was hardly a dry eye in the house.

Weasel’s book Spirit to the Stone is essential reading for anyone interested in the Old Ghost Road story. At its heart is a colourful cast of characters who all got bitten by the bug. Weasel, Wayne, Steve ‘Stacky’ Stack, Jim McIlraith, Bob Dickson and scores more … all have succumbed to the so-called ‘Lyell flu’. 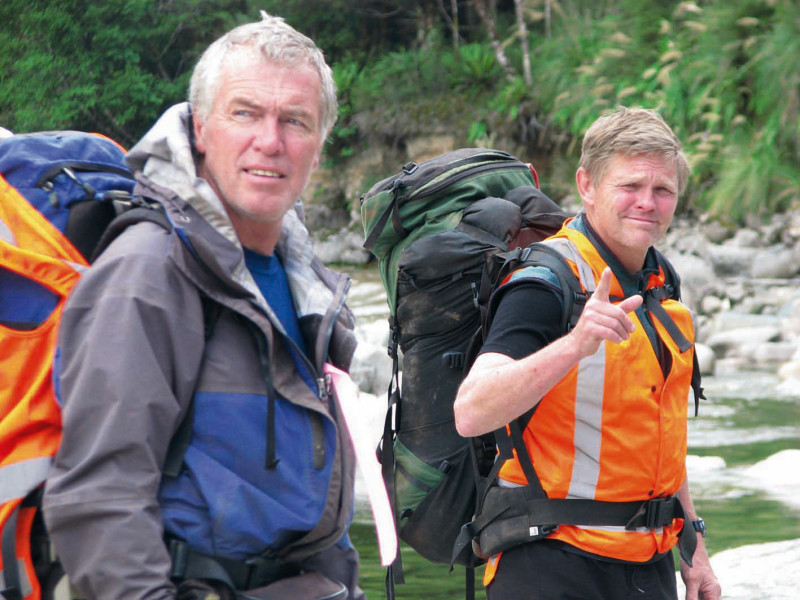 Stacky and Weasel on an early exploration trip to try and suss the Old Ghost route c. 2007 (Phil Rossiter)

Phil Rossiter has had the flu the longest and strongest. Arriving in Westport in 2005 to take up a year’s contract as an environmental scientist for a mining company, he met Weasel in 2006, just after the old map that inspired the project had literally turned up on the doorstep.

By 2007, Phil was averaging 20 hours a week on the project – some of the first few drips in a bucket that at last count numbers around 44,000 volunteer hours.

As the project’s ground crew scoped the backcountry for a pathway through the ranges, others were working on the budget. It was big.

The newly formed Lyell–Mokihinui Backcountry Trust was undeterred. ‘We asked for a reality check and we got it,’ Weasel recalls. ‘But we already believed that the Old Ghost Road could enrich and inspire lives – we were the living proof.’ 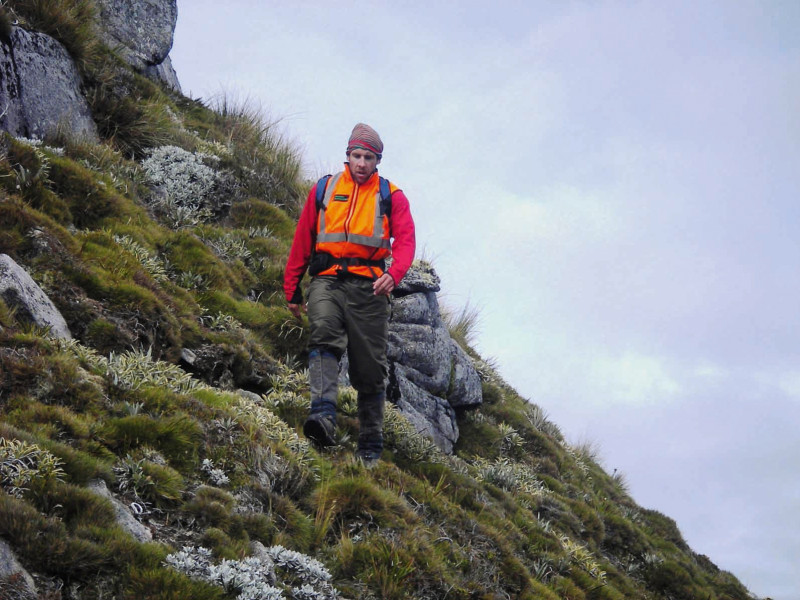 A $2 million New Zealand Cycle Trail grant was added to countless contributions from all sorts of corners, financial, physical and in-kind. For those working up close, the six-year build would prove a white-knuckle ride through the wilderness.

‘It’s like climbing a mountain that’s fogged out,’ says Phil. ‘You can’t see the peak, but you know it’s there somewhere and you’re committed. And the journey goes on and on.’ 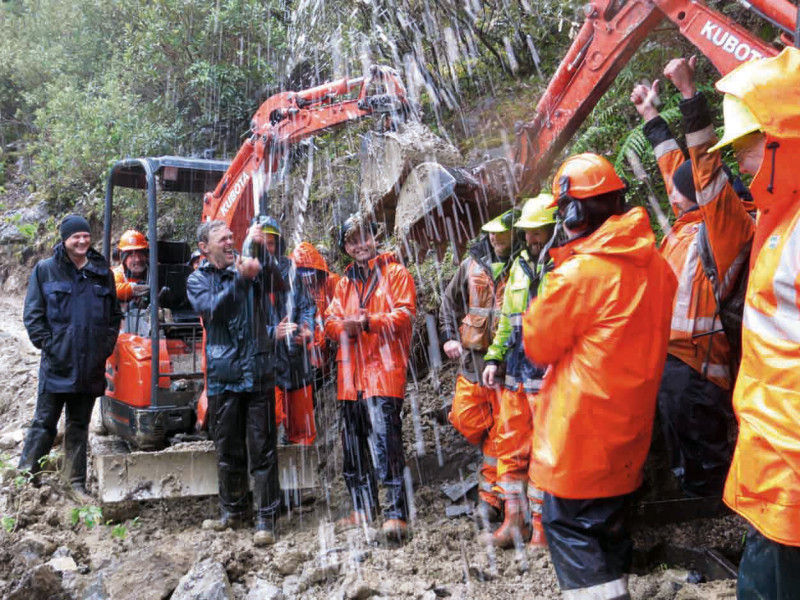 28 October 2015, in the no-man’s land between the Boneyard and Solemn Saddle. Mal Hansen drove a golden spike to mark the spot (Phil Rossiter)

When the two ends of the trail finally met in October 2015, a new kind of challenge had begun. ‘Now we experience the jury of our peers,’ writes Weasel in the epilogue of his book.

The verdict from trail users has been astounding, many declaring it the best wilderness experience of their life. ‘Buller is now synonymous with outdoor activities’, says Phil. ‘People are coming here for adventure.’ Nearly nine out of ten visitors are from New Zealand.

As of February 2020, 26 official trail partner companies were earning at least some if not all their income from the trail. Adding in trail maintenance crew and related staff, it’s estimated that around 45 people directly derived employment from the trail, not to mention indirect employment via supporting services such as service stations and supermarkets.

In all, it is estimated that OGR drives economic activity of around $4.5 million each year, much of which is recirculated locally. The Trust’s income is wholly reinvested in trail maintenance and operations, with the Trust now staffed by three including Phil as its part-time general manager.

‘As volunteers in the early days, we knew we had to build a foundation of love and support. Now we know that half of Westport would step up if we needed help.’

To be fair, some of those are Phil’s family. His brother Richard was recruited from Australia early on in the project, while their parents moved over from Christchurch not long after. Since then, Phil and his wife Diana have produced two new West Coasters, now aged 8 and 3.

Phil says he’s approached almost daily by folks telling him how the trail has changed the town, and sometimes their lives.

‘I’ve had grown men cry when they tell me their Old Ghost Road story. It’s surreal.’

Out on the trail, the hard work of the trail maintenance crew comes with its own rewards. ‘They get passed every day by 50-odd people who want to talk to them and say how awesome life is and how wonderful they are for doing what they do.’

Such feedback is crucial for the trail’s sustainability, Phil tells me.

‘There’s a romance around building trails,’ says Phil. ‘But it doesn’t seem to be as noble to run them. You have to keep finding fuel to keep the fire burning.’

Encouragement also comes via feedback on the trail’s flourishing birdlife, the result of a 1000-trap network. 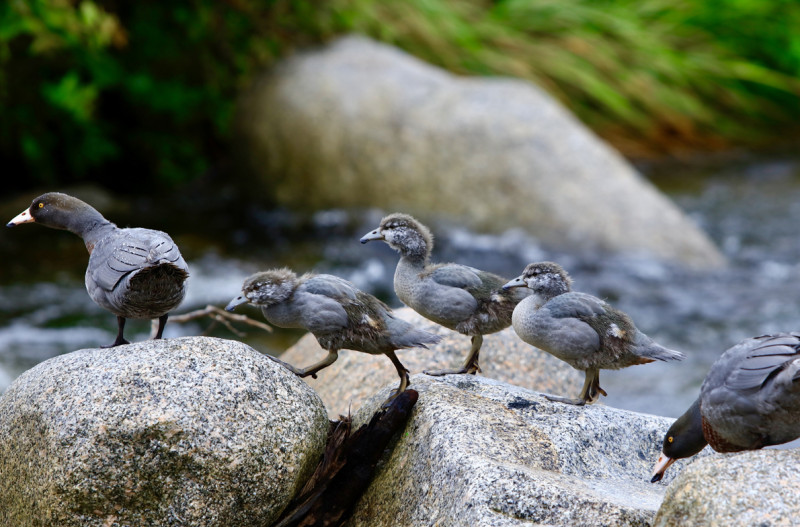 In 2018, the Kahurangi National Park boundary was extended to encompass the Mokihinui end of the trail, offering even more protection and insight into the area’s biodiversity.

‘We’ve always seen this trail as way to bridge people’s disconnection from nature, and engage them in the plight of our wild places,’ says Phil.

Phil is amazed how far the Old Ghost story has echoed across the globe.

‘I’ve been asked to talk about our experience in other parts of the world, so word of our achievements has gone way beyond the Buller.’ 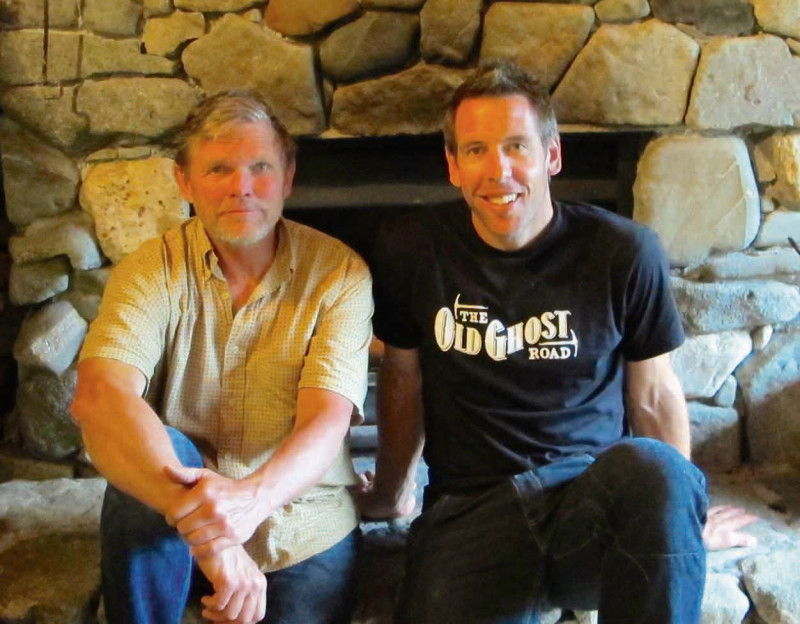 – from Spirit to the Stone, a song by Marion Boatwright.

Riding the trail in winter is a classic Old Ghost Road experience – book your adventure here.